Last week IBF partnered with IBM on a webcast about the latest trends in social intranets. Broadcast to around 250 of their customers, the session was entitled ‘Building a smarter workforce‘. The webcast featured Nancy Goebel and myself from IBF, and Larry Bowden, VP of Portals and Web Experience Software and Peter Ceplenski, Manager , Enterprise User Experience, both from IBM. Peter manages IBM’s own intranet, w3.

The panel discussion was quite far-reaching and covered many aspects of social intranets, including:

If you’re interested in any of these topics then a recording of the webinar is now available. (You will need to register to get access.)

Many of my observations were covered in our recent five-part blog series on social intranets, whilst Nancy shared her perspectives from talking to many members, including some from our London members’ meeting which also happened last week. Meanwhile IBM spoke about some of its work with clients, but also on its own experiences with its w3 intranet. Some of IBM’s slides from the webcast are included below.   (Click to see larger, and hit back browser to return to this post.) Traditionally IBM’s intranet has been regarded as one of the world’s best. For example, earlier this year Paul Miller selected it as one of his top ten intranets to have defined the intranet industry over the last decade.

I found it very interesting when Peter talked about IBM’s own intranet journey over the past 16 years or so and how it had moved from a ‘consumption’ model to a ‘participation’ model, with many different iterations but an increasing emphasis on people moving to the centre of w3. This felt like a microcosm for the way leading-edge intranets have developed over the past decade or so, although perhaps not so successfully as IBM’s levels of adoption, where there has been a corresponding leap in the number of daily page views – currently around the 2m mark. Moreover great adoption is also illustrated by the impressive numbers involved in the use of social tools within IBM: 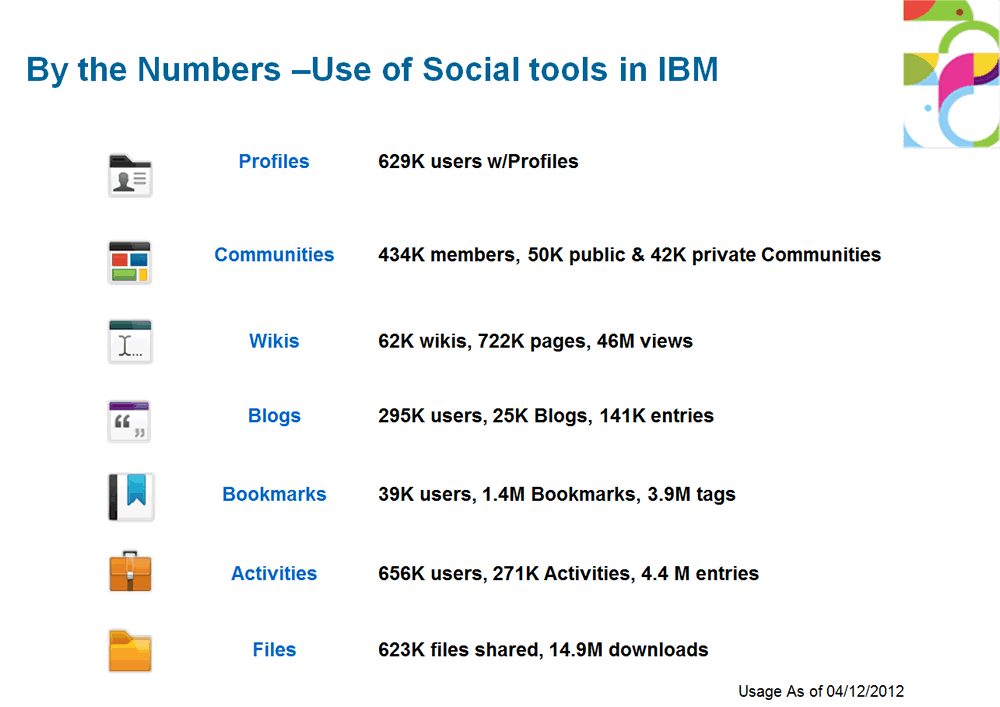 Demonstrating ROI when many benefits are intangible

One of the themes we touched upon in the broadcast was about getting value from social tools. I believe demonstrating and proving ROI is an area in which intranet teams traditionally struggle, and arguably this is even more so in the case of social intranets. But to engage senior leaders or to argue for budget, the benefits of the social intranet need to have a specific number of £ or $ attributed to them.

One of the problems around demonstrating ROI with social intranets is that some benefits are often intangible. For example, I think a social intranet in the right context and conditions can contribute to increased employee engagement, but it is only a contribution, so how do you measure that?  Likewise there are also examples of ‘serendipity’ where opportunities or events occur off the back of interaction on the social intranet. These usually result in great anecdotes and inspiring stories (some of which were recited by the panel in the broadcast), and may have direct savings or generate revenue, but again all these instances  are difficult to quantify over an entire platform. Likewise the benefits surrounding the cultural changes caused by greater collaboration are impossible to put a price on.

IBM’s waves of returns from w3

I liked the way IBM summarised the value of w3 as generating “waves of returns and recognized value”, which I think captures both the tangible and intangible benefits of the social intranet. There are some essential hard metrics based around a dollar saving for time saved per month, as well as time saved for sales staff. There are also some percentage increases in intranet benefits, such as 84% of people having quicker access to experts and shared knowledge. Whilst that figure is quite old it is certainly still valid, and illustrates the potential uproar if it were switched off tomorrow! The intangible benefits are captured by suggesting the link between personal productivity, better team collaboration and then leveraging ideas from around the firm, which in turn helps personal productivity. The experiences of using w3 as an individual, team and community continually but subtly enhance each other. I also think IBM’s slide touches upon an intangible benefit of social intranets and being able to connect to the right people that is not often mentioned – and that’s confidence that people are able to do their jobs more effectively. If users really do feel like they are able to “feel smarter” and they “can assemble the best team fast” that confidence absolutely gives you an additional edge in the workplace over competitors. When the experience of using your intranet is the opposite – very poor – than it is positively energy-zapping.

For an organization like IBM, I suspect having a high-performing intranet is particularly important. That’s not only to improve processes and communication in the same way other intranets need to deliver in other organizations, but as a vendor of intranet and collaboration-related software, being able to know that your own products can be successfully used helps to deliver a better level of customer service and product.

If you want to more insights into IBM’s intranet as well as DWG’s insights into trends into social intranets, then be sure to view the recording of the webinar.

Also if you have a social intranet, don’t miss our ‘My Beautiful Intranet Goes Social’ competition, which aims to find the world’s most attractive social intranets.

And finally, in case you missed it, here is a five-part blog series on social intranets that served as inspiration for DWG’s joint session with IBM.

This is a guest post by Steve Bynghall. Steve was the content producer for IBF 24 2011 and helped research Paul Miller’s book ‘The Digital Workplace: How Technology is Liberating Work’. He is also a benchmarking evaluator and has written three research reports for IBF, and regularly blogs for DWF and IBF. Steve is the founder of Two Hives Ltd, a consultancy specializing in KM, collaboration and web-based projects. Steve previously worked at accountancy firm BDO in a variety of knowledge roles, including managing its global extranet programme. He has co-written a book on crowdsourcing with Ross Dawson titled ‘Getting Results from Crowds’. He tweets (less than he should do) at @bynghall.