The Digital Workplace Group (DWG) is delighted to announce the winner of its My Beautiful Intranet (Goes Social) competition. The aim of the contest is to find outstanding intranets which combine well-integrated and highly usable social features with visual flair and great design.

The overall winner is International Enterprise Singapore, an agency that spearheads the overseas growth of Singapore-based companies and promotes international trade. Its intranet, IEX, is used to share knowledge between employees based all over the world.

In close second place was GfK, a global research company based in Germany. Its new intranet, gNet, is invaluable in supporting global communities of experts.

The result was revealed in the January edition of IBF Live, an innovative online broadcast aimed at intranet managers. A live tour of the intranet will also take place on Digital Workplace 24, taking place in May 2013.

Initially entries were voted on by the public, with the highest-scoring intranets then being considered by an expert panel of judges. Competition judges included Louise Kennedy, DWG’s benchmark programme manager and leading usability expert, as well as the Intranetizen team, a group of four influential UK-based intranet managers who write prolifically about intranet matters.

Above: The homepage of IEX, Singapore International Enterprise’s intranet.

Louise Kennedy said: “Combining social intranets with aesthetics is not straight-forward. The challenge is not just to make social features more prominent and seamlessly integrated but also to demonstrate the business value at a glance, encouraging later adopters and sceptics to join the conversation.”

She continued: “It was a very close contest, but in the end International Enterprise Singapore’s intranet won us over because it displayed the most social interaction. The judges decided that ‘beauty’ is not just about what it looks like, but in how it works, allowing employees to share knowledge directly from the homepage.

“International Enterprise Singapore’s intranet is optimized for high adoption. The microblogging feature is displayed prominently on the homepage, encouraging employee interaction from the outset, with comments charted on a world map and employee photos. GfK’s intranet is also very attractive, with a highly appealing visual design that also combines social features.”

Angela Pohl, Managing Director of DWG, said: “We’re delighted that this year’s My Beautiful Intranet contest has been so successful.  It’s both inspiring and informative to see such great examples of intranets which are so engaging for employees.”

Below: The runner up, GfK’s intranet homepage. About the Digital Workplace Group

DWG is the world leader in intranet benchmarking, research and interaction with offices in London and New York. Its 80 plus members include Amgen, AT&T, Johnson & Johnson, IKEA, Exxon Mobil, ING, Liberty Mutual, and Ernst & Young.

DWG members are typically drawn from Fortune 500 companies and equivalents, as well as medium-sized companies and public sector organizations. IBF has flexible membership options for organizations of different sizes, sectors and geographical location so they are able to participate in IBF at a level that works best for them.Since 2002, DWG has been helping members maximize the effectiveness and value of their intranets through benchmarking, interaction and research. Members agree to strict confidentiality on joining.

Because DWG is independent of any technology vendor all benchmarking findings and recommendations are impartial.

IBF is part of the Digital Workplace Group.

AI and automation today and tomorrow 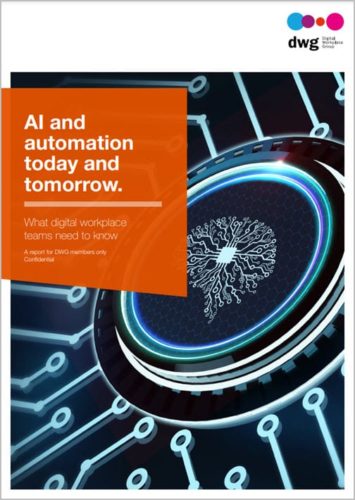