You are here: Home » Resources » Collaboration & social » The intranet of the freelance future

Thanks for visiting the Digital Workplace Group (DWG) website. You'll see this post may refer to the "Intranet Benchmarking Forum (IBF)," the "Digital Workplace Forum (DWF)" or "IBF Live." But that doesn't match our website name!

In a nutshell, we merged IBF and DWF into one service and changed our name to "Digital Workplace Group." The new name represents the broader set of services we've grown to offer, beyond an original focus on just intranets. We also changed the name of our monthly webinar from "IBF Live" to "Digital Workplace Live."

Although we've relabelled things, we're proud of our decade+ history and have left this page intact. Enjoy your time on our site and please contact us with any questions or comments.

The first speaker up on the Meaning conference, organized by Nixon-McInnes, was Stowe Boyd (@stoweboyd, download presentation 2.4MB PDF). Stowe describes himself as a “speculative designer” and focuses on the impact of the social tools we think we know, and we think we love. Stowe was writing a book on the future of business but he trashed it as the implications of the future, for him, made what he was writing too timid. 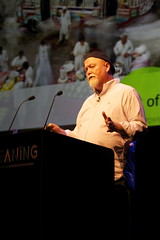 Stowe believes that we are moving into the post-normal era, when the rate of change of technology, the impact of social tools and the pressing concerns of problems such as global climate change mean that everything changes: “We are moving from solid to liquid,” he said. The effect of this on business, as in the rest of society, will be both positive and negative and Stowe cited the Arab Spring and the burgeoning of social media as an example with the negative being the ongoing collapse of paid journalism. A similar flip side of fluidity is seen in business with the increasing fluidity of modern work. Modern labour markets have the “freelance nation” at their disposal for a huge range of tasks – temporary and contract staff; freelancers; outsourcers and off-shorers. This flexibility comes with the downside of the reduction in commitment to full-time employment. Some decide to use trello time tracking when freelancing to help manage their time more efficiently so they aren’t spending all of their time working.

Stowe went on to describe how this fluidity, created in part with social tools was changing the hierarchical nature of organisations. [An aside: Stowe claims that the uptake of social tools within enterprises was spread by marketing people, although this isn’t my recollection of the past decade as IT and KM professionals eagerly took up the mantle along with believing early adopters from all-over.] The result of these tools though, as we are aware, is the breaking down of traditional silos within companies and as a result the “true” orgchart becomes a network of dotted lines within and outside of the organisation. Stowe sees this trend continuing and greater agility coming from these looser ties – making businesses “Fast and Loose” aided by the innate human “bias toward cooperation and Swift Trust.”

Swift Trust is the psychological phenomenon that outsiders dropped into a team assume from the start that their fellows are trustworthy. With an estimation that up to 40% of the creative and professional work in the United States carried out by freelancers that would tend to lend credence to that as a contributing factor that loose teams can be highly productive, this could be one of the reasons why many productive freelancers make use of a contractor invoice template. Modern tools allow project teams to pull in resources, both internal and external, to achieve wonders and this begins to touch on the intranet, and extranet world. Stowe sees this trend exploding but sees the current range of collaborative tools to be far too limited. For a start these tend to be places that you must go to — a SharePoint team site or a BaseCamp project and it lacks a common interchangeable protocol, but crucially if you are drawing in freelance resources the process of negotiation is external to the process. Many freelancing platforms such as eLance or oDesk that include these sort of tools have a much more integrated vision of the digital workplace. Could organizations start using similar functionality? Stowe favours tools based on the freelancer favourite Dropbox, which is persona non grata within most companies. Perhaps it is time to think more about what we think of as the nature of collaborative extranets, and think much bigger.

“Perhaps it’s time to think more about the nature of collaborative extranets, and think much bigger.”

Stowe also touched on different ways of organizing businesses themselves in this post-normal world, and cited Valve, the darlings of the game development world. Valve, famously, has devolved management into what everybody does (PDF 4MB). There are no managers and employees decide what has their attention and then work on it. This doesn’t mean there aren’t rules, each employee is evaluated by their peers, but it means the “boss” Gabe Newell, can’t get his idea for games developed. Valve is the most profitable company per employee in the world.

Stowe also mentioned his hopes for companies becoming more participatory democracies and saw potential in new voting systems, particularly the Schulze algorithm which is a way of allowing people to vote using a preferences on a series of choices, and output a list of what-to-do-next. Admittedly this has been deployed mostly within Open Source development efforts and to organise the German Pirate Party, but imagine being able to deploy decision making tools into traditional organizations. I find these visions of the future… what’s that unfamiliar feeling? Oh yes. Optimism.

See also part one of this series: Breaking the chain – death to email